Flyball is a relay sport for dogs.  Teams of four dogs race against other teams by jumping over hurdles, to get to a box that releases a tennis ball.  The dogs must each catch the ball and run back over the hurdles to you, carrying the ball.

Flyball is great mental and physical exercise for your dog and a lot of fun for both of you!  Flyball is a very exciting sport.

Cindy has trained many dogs in the sport of flyball. Ripple with his Trophy

Her dog Ripple was awarded the “2013 Rookie of the Year” by the Hot Diggity Dogs Flyball Club and Performance Team.

The titles in flyball that her dogs have attained:

Ripple was part of the Hot Diggity Dogs Multi breed team that won the Regional Division Championship for 2014, for Ontario and Quebec.

For an explanation of flyball titles visit the North American Flyball Association page.

To learn more about Flyball: 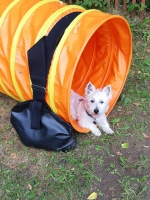